This is the third article in a series about chocolate, the main ingredient of many of Art of Appreciation’s most popular gift baskets.

The last article explored the beginnings of chocolate; how the all of the different kinds of chocolate begin pretty much the same, with the “liquor” being separated into cocoa butter and cocoa powder. It’s at this point where all of this raw chocolate yumminess takes any number of different paths to find its way to our palettes – the only question is whether you prefer a rich dark chocolate, a smoother milk chocolate, or silky white chocolate.

Cocoa powder is mixed with a number of ingredients in various proportions to produce different kinds of commercially sold chocolate. Generally, vanilla and sugar are mixed in, along with cocoa butter.

Wait… didn’t we just take the cocoa butter out? Why are we putting it back in? Returning some cocoa butter to the mixture allows for greater control of the quantity, and allows for blending of tastes – perhaps the chocolatier wants to mix the powder of one type of bean with cocoa butter from another. It’s all part of the recipe.

How dark is dark? And what’s the difference between unsweetened, bittersweet, semi-sweet… are there rules or something? 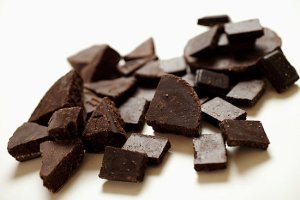 Dark chocolate is “dark” because milk solids in the mixture are few if any. Different types of dark chocolate are determined by the percentage of raw chocolate that remains in the final product. The FDA does not define “dark chocolate” but provides the following guidelines for products containing raw chocolate.

The vague terminology has produced a lot of confusion, and a proposal to “change the definition of chocolate” has become quite a political issue. The proposed change may allow manufacturers to substitute vegetable oil for cocoa butter and still call their product “chocolate”. This not only threatens the integrity of high-end chocolate manufacturers, but opens the door for food packaging that misleads consumers by preying upon the belief that “dark chocolate is good for you” when there is in fact no chocolate at all in that product.

But dark chocolate IS good for you… isn’t it?

Much has been published in recent years about the health benefits of dark chocolate – it lowers blood pressure, it fights cancer, it’s rich in flavonoids and antioxidants, and so on. For each of these claims, there is a study or two which seem to support it, but the National Institutes of Health warns that the research is “far from certain, but the drawbacks are clear.” If fat and sugar and their resultant calories are an important health concern for you, you should think twice before reaching for a chocolate treat – even a “dark” one.

Don’t miss any articles in this series – follow this blog by clicking the “Follow” box on the left!

1 thought on “Chocolate: How dark is dark?”