Remember the lyric from Carly Simon that goes “Anticipation, it’s making me late”? I swear I find myself singing that when I’m putting off doing something I really should be doing, only I change the words to “Procrastina-a-tion, it’s making me wait!”

At the same time I am singing and laughing at myself, I am getting stressed out and berating myself for not simply getting the thing done and over with. And I know I am not alone in this behavior; I think most, if not all, human beings put off doing a task in favor of something else – although some of us do it far more than others.

There are competing theories about why we procrastinate – a fear of failure, a fear of success, a desire for perfectionism, a fear of the responsibility of making a decision – but none of them seem to answer the question as to why we delay filing our taxes or paying the utility bill; these things don’t really have an element of success/failure or decision-making, and do eventually have serious consequences if they are not completed.

Why in the world would it be in our nature to NOT complete tasks that need to be done? Shouldn’t our survival instinct drive us to accomplish that thing, not avoid it? My aboriginal self certainly wouldn’t have benefited from putting off collecting the day’s water supply, so why does it seem second nature to my modern self to put off things that are just as important to my survival?

Is it in our genes?

It turns out that the concept isn’t contradictory, after all. It’s just the way our brains are wired, at conflict with the way our modern society runs.

We are programmed for survival – bring in water and food, stay warm, find a safe place to live. When these tasks were completed in the ancient world, the reward was immediate – as soon as we brought our water and freshly hunted meat into our safe place, we were consuming and preserving it. Mission accomplished, reward received.

In modern times, the things we do to secure water, food, and shelter have a delayed reward. We work for a paycheck that won’t arrive for weeks, we pay a bill with abstract currency (a paper check or a few clicks on a keyboard), and that ensures that our water, food, and shelter – things that are already there – won’t disappear. It’s a very abstract process, and the reward is almost intangible – because really, there’s probably enough food around for at least a few days, and if we don’t pay our rent/mortgage it will be a while before we’re forced to move. We don’t even really “see” the money that we working for… it’s all passed around in electronic form.

It appears that we are programmed to prefer cruising Facebook or playing video games or checking our email because the “reward” for doing so, however small, is immediate. We’re wired to put off tasks until their reward time is closer to their completion time.

That’s not to say that humans can’t plan and work for the future; obviously we do. The ability to plan ahead comes from our neocortex, the rational part of our brain; but the everyday automatic stuff is run by the limbic or “emotional” brain, developed many millions of years earlier than the neocortex.

What can we procrastinators do?

Where does this leave us? What can we procrastinators do? If we can’t – or shouldn’t – bring the reward closer to the chore’s completion time, how do we talk ourselves into just getting it done? Individuals have come up with lots of different methods of motivation – perhaps one of these will work for you? 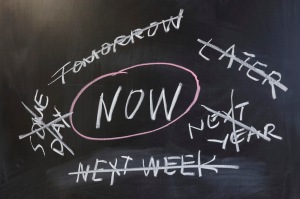 Need more help? Mark’s Daily Apple has an article to help folks achieve their health and fitness goals, although the concepts and tools can be applied toward any accomplishment.