When you talk about tea with the average denizen of the Western hemisphere, they probably assume you are talking about what is known as “black tea”. Three things that this “average denizen” may not know about black tea:

2)      The method for producing black tea was discovered only in the last several hundred years, whereas green tea had been produced for millennia.

3)      The Chinese have always referred to it as “red tea,” a more accurate description of the color of the brewed liquid – because really, would you drink it if it were truly black?

If it’s the same plant, what’s the difference between green and black tea?

When the Camellia sinensis plant is harvested for green tea, it is almost immediately treated with heat to prevent the leaves from oxidizing. If “black” or “red” tea is desired, however, the leaves are manipulated in some way to cause bruising, then allowed to fully oxidize – or ferment, as it is usually called in the trade. The techniques of manipulation vary – rolling, crushing, stirring – and produce slightly different flavors.

The exact timing and reason for the discovery of black tea – or, more correctly, the oxidation process –  is not known, although it is clear that it was in wide production by the 1500s. There are two prevalent stories about how black tea came to be; there is likely to be truth in both.

The first story is political. When the first Ming emperor came to power in the 1300s, he decided that the previous dynasty’s corrupted stranglehold on the tea trade needed to be broken. He made it illegal to produce the hard-packed tea cakes that were being traded as currency, proclaiming that all tea now had to be loose. Large-scale production factories found it difficult to produce loose-leaf in large quantities, and for a while the industry floundered while new techniques were explored. Some of this exploration resulted in strange, reddish leaves – the defining characteristic of black tea.

The second story says that a passing contingent of soldiers stopped in a small tea-producing village. They made beds of the villagers’ loose tea, sleeping on the soft leaves and completely halting the production process. When the soldiers moved on, the leaves they’d been sleeping on were ruined – bruised and darkened by the soldiers’ body weight, heat, and moisture. The villagers, in an attempt to recover their crop, dried the tea and sent it to market anyway; and the foreign merchants loved it, buying the entire crop.

Black tea in the West

Indonesian merchants were the first to discover China’s black or “red” tea, and its use slowly spread West. By the 1500s it was found in what is now Italy and Portugal. By the mid 1600s, English coffeehouses were selling the popular drink at a high price.

Please visit www.artofappreciation.com to view our huge selection of beautiful tea and bath and body gift baskets. Order by May 3 for guaranteed delivery by Mother’s Day! 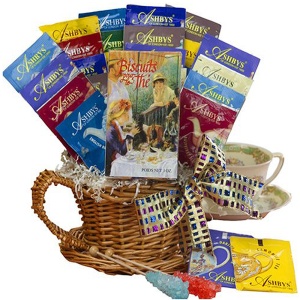 Spot of Tea gift basket from Art of Appreciation